The political bodies in a parliamentary or congressional system are meant to reflect the views of the population. To take this further, they should ideally be representative of demographics. The legislators who make decisions on behalf of the populace should be able to associate with their constituents. In such democratic systems, the vast majority of nations fail to have this adequate representation particularly when in regards to female representation. Gender ratios in most countries hover around 50:50, ideally, but most democratic governments do not reflect this. CSR has been a strong advocate for implementing gender quotas for females in the Indian government. 50% females would be the ideal. This can potentially allow for more legislation for women’s rights to be passed and females will have adequate representation in government. The ultimate goal is for further female empowerment and to improve the quality of life for all citizens. 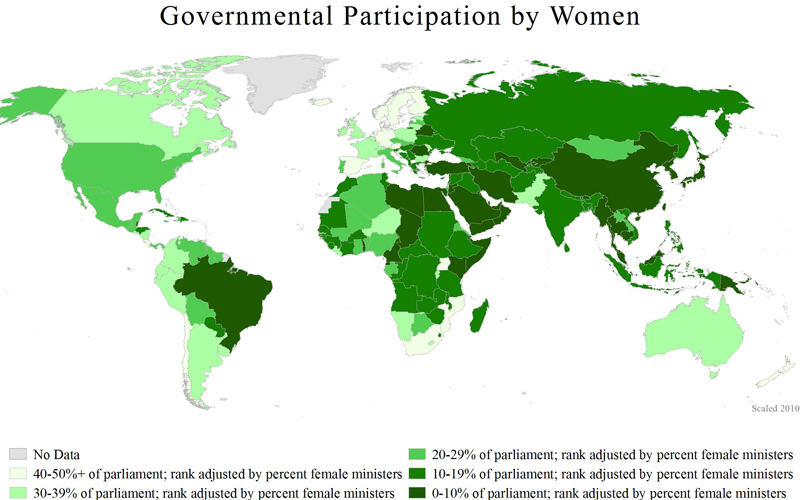 In many of the world’s most developed democracies, serious gender imbalance in government is rampant. In the United States, 19.3% of the House of Representatives and 20.0% in the Senate are women (as of January 2015). Similarly, in the United Kingdom, 19.7% of the House of Lords and 19.4% of the House of Commons are women. What is most interesting is that these numbers are in line with global averages. Some of the world’s most developed countries are only average when it comes to female representation in government! Try to guess which country has the best female representation. Perhaps Canada, Germany, Australia or Sweden? If you guessed any of these, you would be wrong. Try Rwanda. Yeah, that’s right! Rwanda is actually number one in the world and is also the only place where females represent a majority in the single-house system they have. They certainly seem to have come a long way since pre-genocide times when the levels were much lower. So we need to ask ourselves what causes these differences and why other countries cannot achieve similar levels.

I am an NRI living in Canada. I see different nuances in the two governments of India and Canada. One thing that is similar, however, is that of women involvement. Canada has low levels, although this is definitely changing. The key difference is the different perceptions of female involvement in government. As this becomes normalized, the levels of female representation go up. Canada has had one female Prime Minister, Kim Campbell. Although she was not elected or re-elected, she commanded high popularity during her time in office. India on the other hand can claim Indira Gandhi as one of the most influential South Asian politicians of our time. But what is most difficult, especially in India, is this transition into the world of politics. You can either be born into a political family (Indira Gandhi) or marry into one (Sonia Gandhi), any other route is very difficult.

To try to address this, India has instituted a quota system for Gram Panchayats, village leaders. One third of all positions are reserved for women, and some states have even increased this to half. Through this system, India has seen much larger female representation at the village level. The goal now is to increase this to the national level and see similar trends in other countries. The Women’s Reservation Bill or the 108th Amendment is currently tabled in the Lok Sabha (lower house) of the Indian Parliament. If successfully passed, there would be 33 % of seats in the Lok Sabha reserved for women as well as 33 % of seats in all state legislative assemblies. CSR has been a strong advocate for this bill and is even pushing for 50 % reservation. The bill has currently been passed by the Rajya Sabha (upper house). This type of legislation can have a long term positive impact in encouraging females to get involved in national politics. In many cases, women who are appointed through a quota will continue their service in government (even win re-election) after the quotas are eliminated. Many countries have had implemented quotas in the past and no longer need them. In 1995, Rwanda ranked 24th globally in terms of female representation, and jumped to 1st in 2003 after quotas were introduced. Critics of such quotas state that this disadvantages men and dissatisfies classic liberal notions of equality. This is certainly true. But in many cases, this can be a temporary transition to uplift the position of women in politics and society. There will come a time when such quotas are no longer needed, when true equality exists; we’re just not there yet.

CSR and other Indian NGOs focused on women’s rights are fighting for this legislation to be passed in Indian government. India is the largest democracy in the world and has had many influential women in positions of power. The nation must see that this is not just a fluke or rare occurrence. Being the largest is one thing, but being the most equitable is what we must strive for.